skip to main | skip to sidebar

I previously stated that Lands End is a state park, but I have been corrected. A nice docent who works at the park put a nice comment in my previous post. Anyway -
Lands End is part of the Golden Gate National Recreation Area and is managed by the National Park Service. While we enjoyed our hike, we didn't get from one end to the other. I'll definately enjoy going back again though! 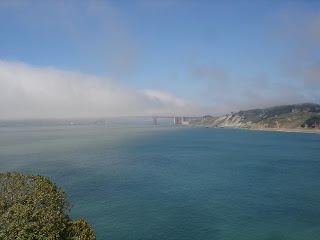 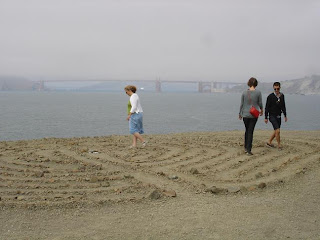 My youngest son lives near and works in San Francisco. He's become a pretty decent tour guide too. This visit, he took Bob, myself and his new girlfriend to Lands End state park in San Francisco. It was listed as an easy 3 mile walk. I'd disagree with that. There were a lot of stairs and while parts looked paved in the internet pictures, we didn't come across any paved parts. But it was lovely. 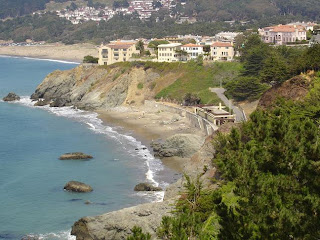 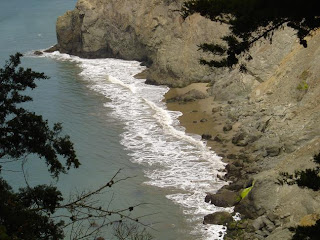 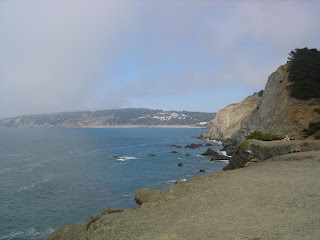 All blocked and ready to wear! 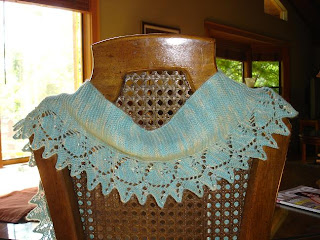 And on my lovely cousin that I made it for. 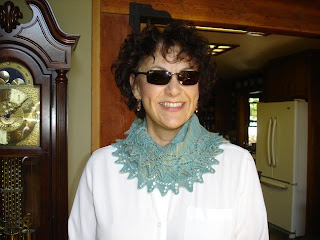 King of the Road

I'm currently at my cousins enjoying her hospitality. King of the Road is playing on the radio, we just finished a wonderful breakfast in front of her floor to ceiling windows looking over the woods surrounding her home. She lives in northern California in a rural area that is wonderfully beautiful. I'll be sure to post some pictures later. I'm posting now from her computer, so don't want to add my pictures, etc.

Enjoy the sunshine where ever you are!
Posted by Felicia at 1:26 PM 2 comments:

And it's still a blob. I didn't have enough yarn for another repeat, so I ripped back to the lifeline and bound off. Probably a week ago. And while not impossible, it's not easy to block something in a hotel room. So the blob is currently residing in the knitting bag in the van!

The other day I started a tank with some stash yarn. And it was turning out really bad. It's a variegated yarn. At first it was striping very nicely. But then it started acting really wierd. The colors were just turning into zig zaggy blobs. So it's waiting for the ball winder to be ripped out and rewound. But! the yarn was turning my hands black while being knit. Tess' Designer Yarns. Read a couple reviews on Ravelry and apparently it is recommended that the yarn be washed....before knitting with it.

I also had the color in the yarn turning my hands black with some socks that rock. I only knit one cuff (out of obviously two). Not sure if I want to rehank and wash that also.

Not having much luck here!
Posted by Felicia at 12:23 AM 2 comments: 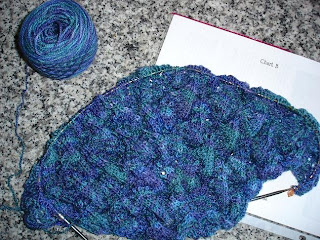 Prior to blocking, lace knitting looks like one big blob. Blocking is amazing. I am further along than the picture shows. I may be done, but I'm not quite sure. Because of the design, you need to bind off after the last row. Which I'm at. I have some more yarn, but I don't know if there is enough for a complete repeat. So I'm inserting a life line to see just how much further I can get!
Posted by Felicia at 2:42 PM 2 comments:

I get the opportunity to test knit two new patterns! This one is by Susan Lawrence, not sure of the release date. I was given this yarn last year when so much was stolen. It's 380 yards of Sea Wool by Fleece Artist. I knew I wanted to make a shawl as soon as I saw it. But most shawls are 400+ yards. In the scarf I am testing, Susan used ~350 yds of laceweight yarn. But since I am only making sure the pattern is clearly written, I cast on with this yarn immediately!

This shows a bit of the pattern. It goes so very quickly! 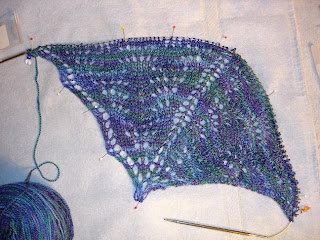 At least on my monitor, this one has a more accurate color: 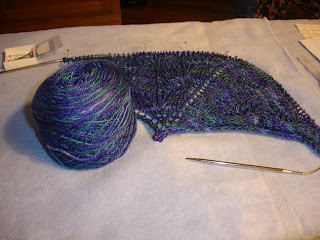 The umpteenth thunderstorm of the day is moving through so I'd better shut things down. I never knew the spring was supposed to last for this many months! I think the high Tue was in the 60's.
Posted by Felicia at 6:02 AM 2 comments:

Felicia
I'm knitting through the changes in my life while (temporarily) living in the northeastern U.S.