skip to main | skip to sidebar

I was busy and hadn't been reading my usual blogs recently. But I'm trying to catch up with friends. And it seems that lots are having a contest! Darcy is awarding a copy of Kate Jacob's newest book in the Friday Night Knitting series. And while I haven't even read the second book, I'm still gonna try for winning the third. The second won't be hard to read. I've always been a reader. I did buy the first book in the series and then included the book in a swap package I was sending out. Darcy also has a wonderful story posted on her blog with a background story about going to Kate Jacob's book signings. I haven't ever lived near an area that had book signings - I'm a bit jealous!
Posted by Felicia at 8:45 AM 1 comment:

I haven't been taking the time to read many (or hardly any) blogs lately. And I had to scroll quite a ways before finding this post with all the details. But Chan - and a ravelry post I put up earlier got me thinking about blessings.

It's been a tough week - in a very odd sort of way. And yesterday didn't end the wierdness either. Last night my dryer died. I tumbled the clothes around for about 10 minutes and then just quit. I opened the dryer door (no light, bad sign) to obviously wet clothes - and a bad "burnt" smell. Worse sign. So I hung up all the clothes and went back to bed.

Where is the blessing here? Well, I could have been gone for a few days and come home to moldy clothes. Since the dryer just quit, I'm not even gonna talk about fire.

But I have the money to buy another one. Mind you, I am gonna stalk Lowe's and Home Depot looking for a discounted scratched model. I'm hoping that savings will balance out the delivery fee since I'm home alone for the next 5 weeks and there is absolutely no way I can wrangle a dryer by myself.

But during the craziness of this week, I had one neighbor pick me up at the airport (at 10:45 PM thankyouverymuch), a friend drive me around to get the keys made for my car yesterday, and another neighbor come over and put my new 100 pound lathe up on the work counter.

And aside from the obvious - I have heat in my home, a roof over my head and wool to knit with. And I didn't hesitate to buy some silk/cashmere yarn at the show last week from the Jade Sapphire booth.

I think I'm gonna contact Chan about donating a prize! Stay tuned. Oh, wait! No camera. Well, Chan will have to post a picture for me when the prize arrives at her house.
Posted by Felicia at 8:22 PM 2 comments:

In which I prove (again) that I am an idiot

Well, I made it home late last night. And today I feel rather like I've been beat. My contacts are funny, I have a horrid headache and just feel like I've been through the mill.

I've taken a part time job, so I needed to return after the Houston show. Plan A involved driving both vehicles and me driving home afterwards. Well, that plan just worried Bob too much. So we switched to Plan B - ride out with him and then fly home. Which would have worked great if I had a brain.

So I make my plane reservation flying one way from Houston to Scranton - and actually get a decent rate. The day before, I try going on-line to check in ahead of time and I can't. Try again that morning - no luck. So I go downstairs and ask Bob's friend that we stayed with (who is also a Bob. Must have been hysterical when they were high school buddies and ran around together all the time.) to see what the problem was. Well, the problem was that I was trying to check in two weeks early. Yep. I made the reservation for the wrong date.

So I couldn't get another flight out of Houston to Scranton that day. But Bob was driving to Kansas City and I could get a flight from there home. So I got to ride along to KC. Get to the airport and they very nicely ask if I want to get on an earlier flight to Chicago where I changed planes. Jump on that hoping to get onto an earlier flight into Scranton. There wasn't an earlier flight, but at least Chicago had better food options than KC.

My neighbor picked me up from the airport and it wasn't until I got to his house that I found out I didn't have keys. Bob has torn apart our van and I really do remember putting them into my suitcase. So somewhere along the way, United airlines has lost my keys.

I finally got help on the phone when I broke down and was almost hysterical. I kept being sent to voice-mail hell. When the airline loses something of yours, you have to call each airport because there isn't a centralized lost and found. One of the numbers was disconnected. And the very nich people on the phone kept giving me the disconnected number. When I explained (over and over) that the number didn't work, I would get rerouted into the automated system.

I did have one stroke of great luck today though. I called a locksmith to see how on earth I could get another key for my 1989 car. She explained about key codes and told me who to call - and what to do if the new key didn't work well in my old locks, etc. So while the day was wasted on the phone call to hades/United, I now have a working key for just under $20.

I think I'm going to go buy a coffee and a new lathe. Gee....I wonder if all those wonderful calls have anything to do with my headache???

Posts will be picture-less. Bob has the camera in Kansas City. Bob and the camera are leaving there and going to several other states, so I will be cameraless until Thanksgiving!
Posted by Felicia at 2:41 PM 3 comments:

There has got to be a storm coming

This morning I woke up feeling pretty darn good. Several hours later, my eyes are puffy, I have a horrid headache and I pretty much feel like I've been beaten. There has got to be a big storm coming through here. It's rather cloudy and very windy right now.

I was an idiot and thought my new skein of yarn from Embrace the Lace was 470 yards. Nope. It's 740 yards. Definately plenty of yarn to make the Norwegian Woods shawl I mentioned in the previous post. Now I'm gonna see if some beads I bought a couple months ago will work! Oh, wait! I'll be in Houston next week and there will be plenty of beads to choose from if the ones I have on hand don't work.

I'm having fun playing on the lathe. Drilled out the centers on some wood blanks last night to make some needle cases for our booth. And some acrylic blanks came in the mail today. Gosh, this will be fun! Talk to ya in a couple of days probably!
Posted by Felicia at 12:50 PM 4 comments:

Last week was a great mail week. While not "fun," I did receive some black sock yarn. For some bizarre reason, I'm not especially excited about knitting these socks. But I've started a new part time job and I'm required to wear black socks. So I stopped at the store and bought two pair. Do you have any idea how odd it felt to put on store bought socks after several years of wearing only handknit?? So while not fun, black sock knitting is a bit important. I'm trying out some Knit Picks sock yarn. 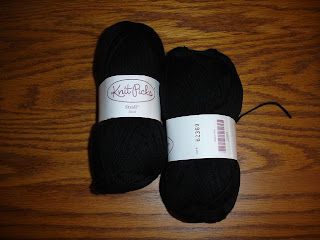 Also last week, I received my Sep Embrace the Lace shipment. Much more fun than black sock yarn. Although oddly enough, this is also sock yarn! 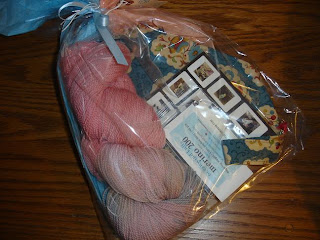 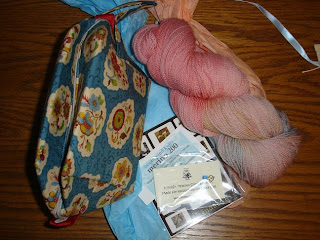 There's a lovely project bag also included. In each lace club shipment, there is also a coordinating stitch marker. Each very nice. I did notice that I was so impressed with the pattern that I didn't even include it in the pictures! I do truly like the pattern. I'm thinking of making Sivia Harding's Norwegian Woods shawl with the yarn. There are several people in the lace club who don't like the yarn and would be happy to sell it. I haven't even asked how much they want. I'd like a large cozy shawl, but the yarn is handdyed and I know two skeins would never match. Ah, well...
Posted by Felicia at 10:49 AM 1 comment:

It is a week before we leave for Houston so spare time is rather sparse on the ground. But I'm gonna try to get a few posts up. I haven't ever been a very regular poster. But I miss doing so when I haven't posted in a few days. Must be a good sign!

My team in Dish Rag Tag isn't doing too well. There was a bit of a problem right before the end and our last person had to drop out. And I think it took about 2 days to get the replacement all lined up. Drat! Guess it was too much to hope for to be on the winning team two years in a row! But my personal DRT glory is unabated. My prize from Emily's favorite dishcloth contest arrived in the mail. What a fun pattern booklet plus two skeins of cotton and some bamboo straights. These just might actually be my first pair of straight knitting needles! Oops! I'm further behind than I thought - give me a minute to transfer the pictures from the camera onto the computer. Ok, let's try this... 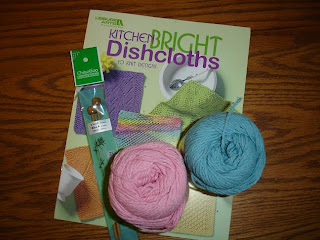 Felicia
I'm knitting through the changes in my life while (temporarily) living in the northeastern U.S.